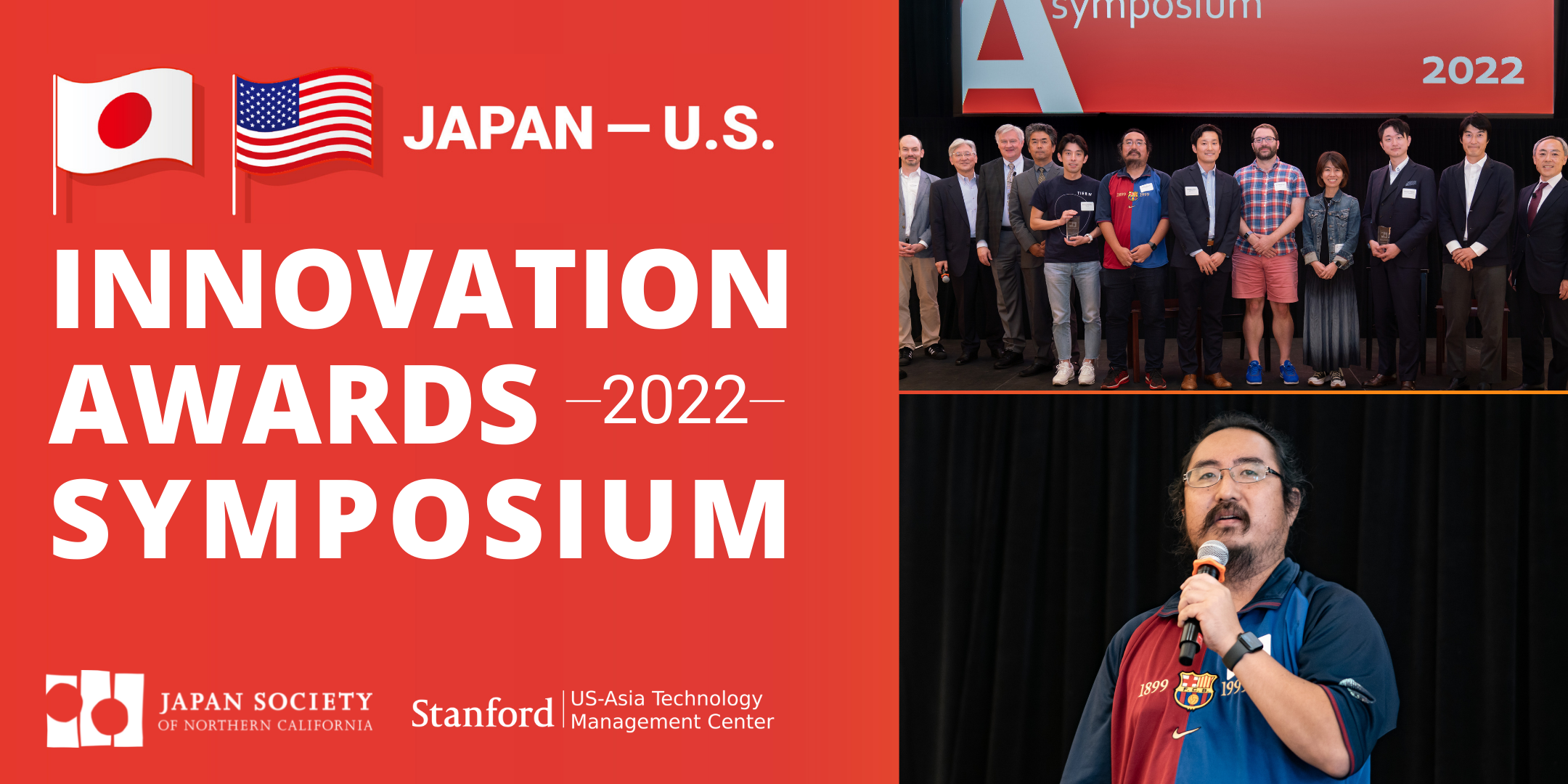 On Thursday, July 14th, the Frances C. Arrillaga Alumni Center at Stanford University buzzed with introductions and networking as people gathered for the 2022 Japan-U.S. Innovation Awards Symposium. This was the first in-person symposium since 2019, due to COVID. Hosted by the Japan Society of Northern California and the Stanford University US-Asia Technology Management Center, the event’s mission is to encourage Japan-U.S. innovation and entrepreneurship by awarding companies with Japan-U.S. connections for their noteworthy innovations in business or technology.

The exciting day kicked off with Keynote Speaker Cal Henderson, co-founder and chief technology officer (CTO) of Slack. Decked out in a Hawaiian shirt and shorts, an expression of Silicon Valley fashion and culture, Henderson described Slack’s presence in Japan and the role the company plays in the future of work. Jon Metzler, a member of the Japan Society of Northern California board and a lecturer at UC Berkeley, hosted the fireside chat.

Allen Miner, founder and chairman of the SunBridge Group, announced the SunBridge Emerging Leader Awardees: Databricks and TIER IV. Matei Zaharia, the co-founder and chief technologist of Databricks, and Daisuke Tanaka, the COO of TIER IV, accepted the prestigious awards and presented on their companies. San Francisco-based Databricks is a data and AI company with offices around the globe that enables massive-scale data engineering with its Lakehouse Platform in the cloud. Tier IV is a deep-tech startup based in Japan and the creator of Autoware — the world’s first open-source software for autonomous driving.

To discuss the importance of women in tech was Radhika Krishnan, global chief product officer of Hitachi Vantara. Michi Kaifu, CEO of ENOTECH Consulting, joined the conversation. Krishnan described her own experiences and struggles as a woman in the tech industry and described the importance of female empowerment in STEM.

Last, but certainly not least, was the Innovation Showcase presentation, which recognizes five exciting startups at earlier stages of development with the potential to be disruptive and transformational. This year’s awardees were: CureApp, GITAI, Kyoto Fusioneering, Telexistence, and WARPSPACE. To accept the awards were:

After the event, guests were free to mingle and network, as well as enjoy light snacks and refreshments. The Innovation Showcase awardees had booths set up for guests to inquire about their companies and answer questions one-on-one.

The 2022 Japan-U.S. Innovation Awards Symposium was a success, serving as inspiration for future innovators and entrepreneurs as well as bolstering friendship between Japan and the U.S. Until next time!