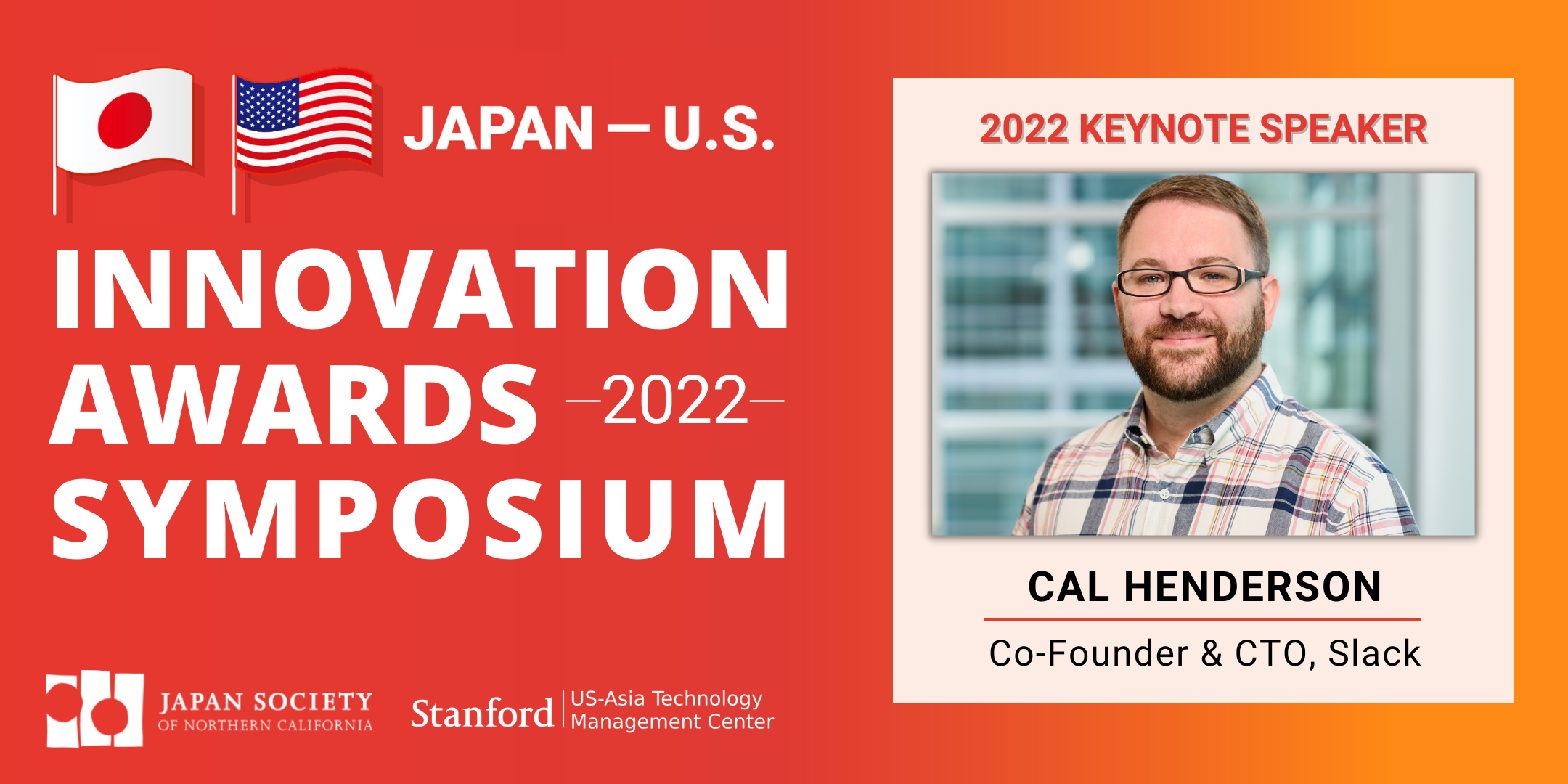 As Co-Founder and CTO of Slack, Cal Henderson oversees the company’s world-class engineering team and sets the technical vision for the company. In 2019, he was named a Fortune 40 Under 40 honoree and recognized by the World Economic Forum as a Young Global Leader. Previously, Cal built and led the engineering teams at Flickr, through its acquisition by Yahoo. An experienced technology leader and a popular speaker on engineering scalability, he authored the best-selling O’Reilly Media book Building Scalable Websites. Cal was also a pioneer in the use of web APIs, and created the basis for OAuth and oEmbed, now used by YouTube, Twitter and many others. Cal was involved in London’s early online network through his work with digital creative communities and the blogosphere. He has a BS in Computer Science and has received an Honorary Doctorate from Birmingham City University. He now resides in San Francisco.

The 2022 Japan – U.S. Innovation Awards Symposium will take place at Stanford University’s Arrillaga Alumni Center. The Symposium will include the presentation of the SunBridge Emerging Leader Awards to two late-stage growth companies that are transforming an industry or value chain, and the Innovation Showcase featuring five exciting Japanese startup companies of interest to Silicon Valley and world audiences. The 2022 SunBridge Emerging Leader Award – U.S. winner is Databricks, the data and AI company and pioneer of the data lakehouse program, while the SunBridge Emerging Leader Award – Japan goes to TIER IV, creator of Autoware, the world’s first open-source software for autonomous driving. The Showcase awardees will be announced in a subsequent press release.

The Japan – U.S. Innovation Awards Program, which is the longest running program in the Bay Area that highlights innovation and entrepreneurship links between Silicon Valley and Japan, has recognized over 43 outstanding U.S. and Japanese companies with unique technologies and business ideas that are disrupting their respective sectors. For more information on the Symposium, including speakers and participants, and to register, please visit: https://www.usjinnovate.org/.

Japan Society of Northern California
Since its founding in 1905, the Japan Society of Northern California (JSNC) has advanced U.S. – Japan mutual understanding in a global context. The Society offers an array of programs and networking opportunities for people and organizations in the Bay Area with a strong interest in Japan. It is the go-to place for U.S. – Japan insights, opportunities, collaboration, and networking. The Society is a dynamic link connecting the world-renowned innovation and entrepreneurial ecosystem of San Francisco/Silicon Valley to a resurgent Japan.

Stanford University US-Asia Technology Management Center
The US-Asia Technology Management Center (US-ATMC) is an industry-funded center in Stanford University under the Stanford Global Studies initiative. Established in 1992, the US-ATMC conducts education and research into innovation and emerging business trends in technology-intensive industries. Its courses and public programs provide Stanford students and the Silicon Valley community with knowledge and analytical capabilities that are important to global success in high-tech fields in the 21st century.